Thanks to Kate Ridgway at the Department of Historic Resources, we have an update on the conservation of our cast iron stove excavated at Fairfield!  For background information on this project, you can read our previous blog post “What’s Under the Rust? Preserving and Conserving Fairfield’s Cast Iron Stove”.

As our previous post described, the first step in conserving the stove is to document the artifacts’ condition.  Kate started by taking photographs of each artifact to show what it looked like before conservation began.  These photos will serve as a comparison to the final, conserved product.  In the case of the stove, Kate expects a vast difference in appearance before and after the treatment. 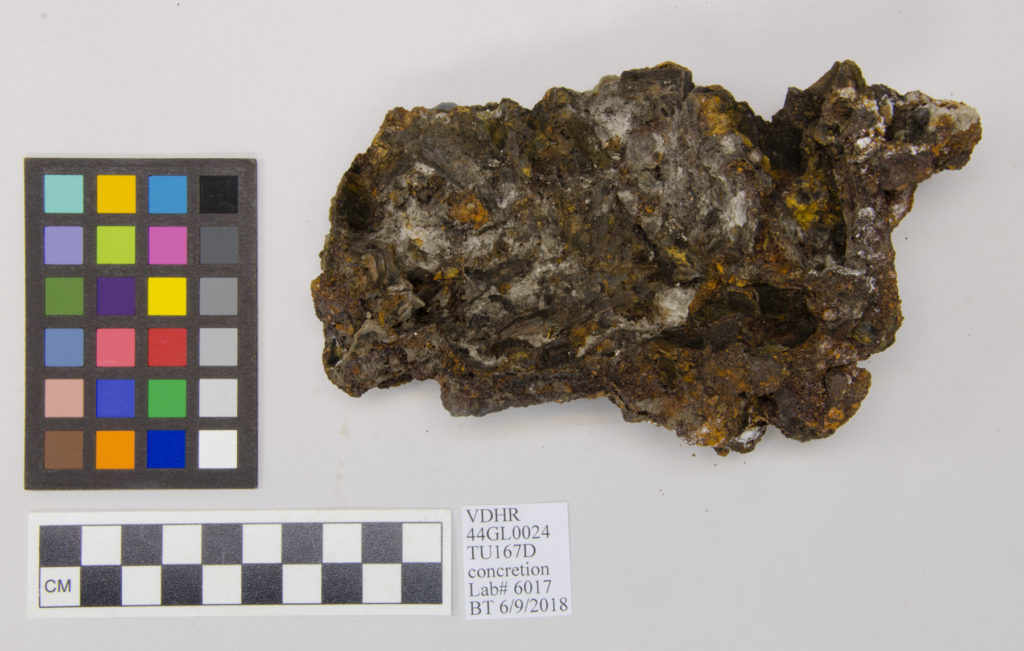 A stove part before treatment

As this photo shows, some of the stove fragments are hardly recognizable behind deposits of ash, charcoal, and other residues, due to the manor house fire in 1897 and their time underground since then. To see inside these concretions and deposits of ash, the conservator takes x-rays of each artifact. This reveals how much iron remains in the artifact and how much has degraded into rust, which gives the conservator an idea of object’s stability and identifies any fragile areas they need to be aware of. 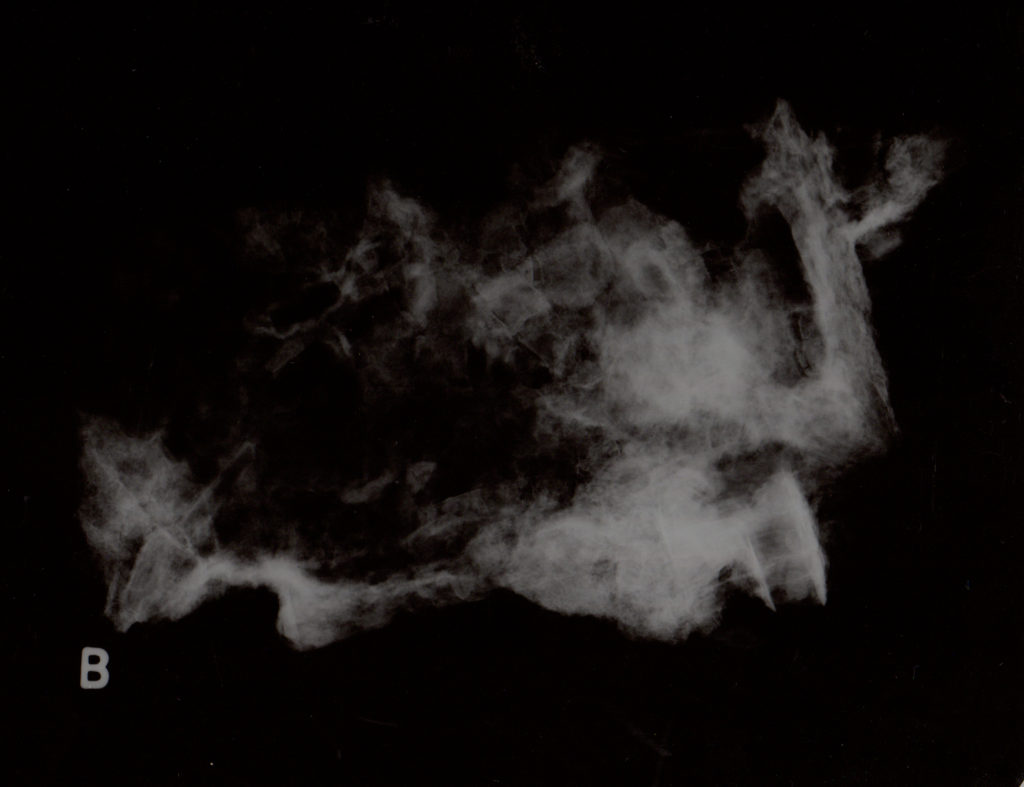 Kate and her team, which includes DHR conservation interns Shannon Bremer of Mary Washington University and Anna Alpern of the University of Virginia, x-ray each artifact several times. The photo above shows a higher-powered x-ray, which shows the thicker, denser areas of iron that may be more stable. White areas in the x-ray are more well-preserved, and dark areas are more corroded and less well-preserved. 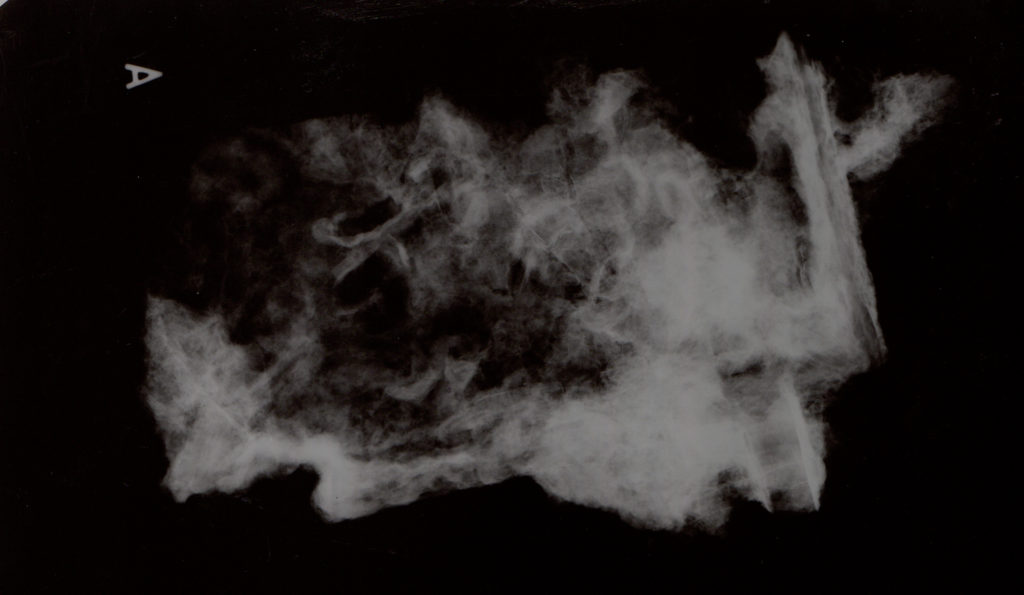 Stove part as seen in a weaker-powered x-ray

This x-ray was taken on a weaker power setting.  It shows more of the thinner, less well-preserved areas of the artifact. Based on these x-rays, Kate and her team have determined that the object hidden beneath the concretions and layers of rust is actually a door hinge.

After the conditions of the artifacts have been assessed, the careful removal of corrosion can begin. In the photo below, conservation volunteer Mariah Travis is performing air abrasion on the same stove part. The x-rays (seen in the background) are very useful here, as they help Mariah know what to expect as she handles the object. Air abrasion is similar to using a mini sand-blaster, but using aluminum oxide rather than sand. It helps to remove corrosion, can separate artifacts that are corroded together, and otherwise helps prepare the artifact for the next steps of treatment. 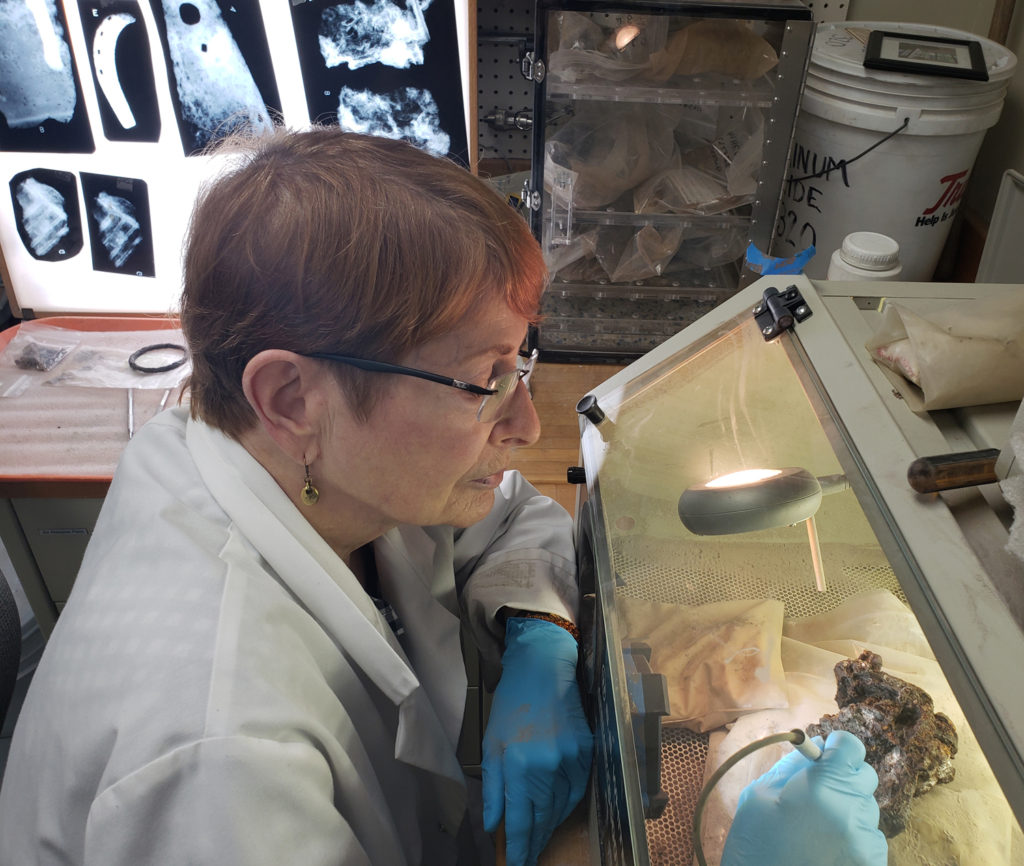 Thanks very much to Kate Ridgway at the DHR for the photographs and the information compiled in this post.  We will continue to post updates on the stove conservation project, so keep an eye on the blog to find out more!