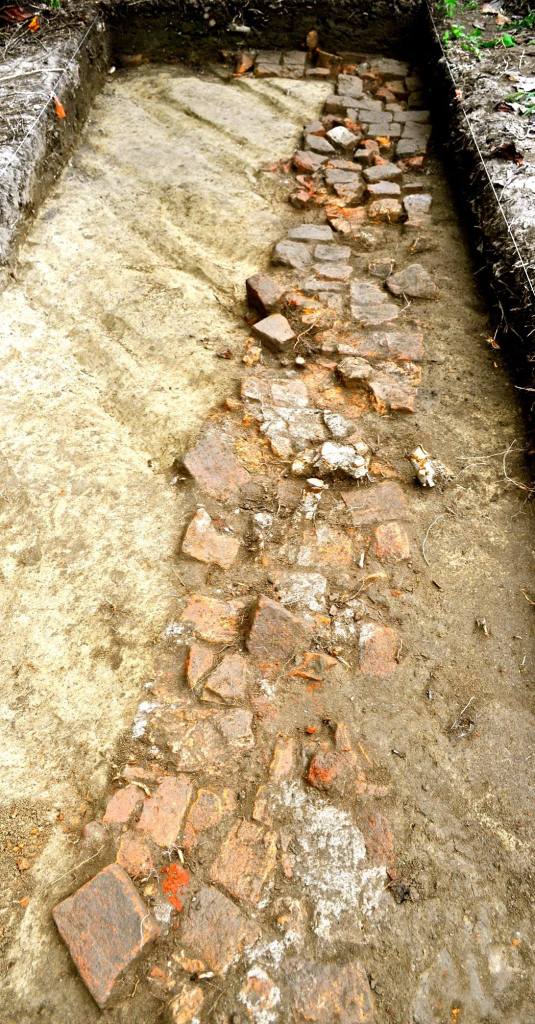 A brick bat foundation discovered east of the manor house at Fairfield. What kind of building does it represent?

Fairfield Plantation has no ghost stories (that we know of…), but we have plenty of mysteries. How was the west wing lost in 1839? Why was there a chicken tied to the front porch in 1897? Who relic hunted the top of the well adjacent the house in the mid-1980s? The most intriguing mystery? Where is the earlier house (or houses)?

The mystery began for us when we started our research in 2000. The only previous archaeology on the property was in 1964 by professor John Blair of Richard Bland College (of the College of William and Mary), who had previously finished a masters thesis on the political rise of the Burwell family in the 17th century. He visited the site with his students and James “Jimmy” Knight, an archaeologist with the Colonial Williamsburg Foundation. But Blair’s work would didn’t focus on the manor house. Someone in the group found a wine bottle seal on the surface of the plowed field not far from the manor house. Blair and his students excavated directly beneath this lucky spot and uncovered a brick-lined and tile-floored cellar filled with early 18th-century artifacts including wine bottle seals embossed with names of some of the county’s wealthiest property owners (such as John Smith of Purton, Lawrence Smith and the Throckmortons). Given the age of the artifacts and substantial quality of the cellar, this could be the pre-1694 Burwell manor house.  Upon meeting with Blair in 2001, he presented us with a handful of artifacts he had recovered, including a complete early 18th-century wine bottle and a wine bottle seal with the initials IHB and the date 1704. 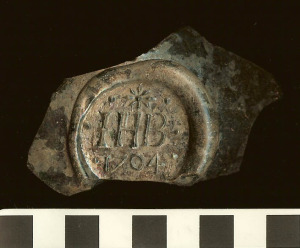 Where and what was this remarkable feature? Was this cellar part of an earlier house built for Lewis Burwell II, or could it have been beneath a support building, such as a kitchen? We spent a small part of each summer during many of the last fourteen years searching for this cellar, which, according to local historian J.J. Nicholson, was located “150 feet E[ast]/S[outh] of the ruin”, but to no avail. Despite the valiant efforts of some of our best interns, not to mention remote sensing studies, close interval shovel testing, and brick probing surveys by staff, we could not find this elusive feature. (Read about previous intern and employee Mark Maloy’s search for the cellar and 17th-century site here – ASV Quarterly Bulletin). But in the summer of 2011 one of our intrepid NIAHD students (National Institute of American History and Democracy at the College of William and Mary) recovered a large brick fragment from one of the many test units surrounding the manor house. Thicker and wider than most of the bricks from the main house, this brick suggested a different building.  After carefully cleaning down the test unit where the unusual brick was unearthed, we discovered a foundation just under two feet wide, constructed almost entirely of brick bats. Could this be part of the building found by John Blair- is, or is it another of the innumerable outbuildings that would have been part of this plantation? 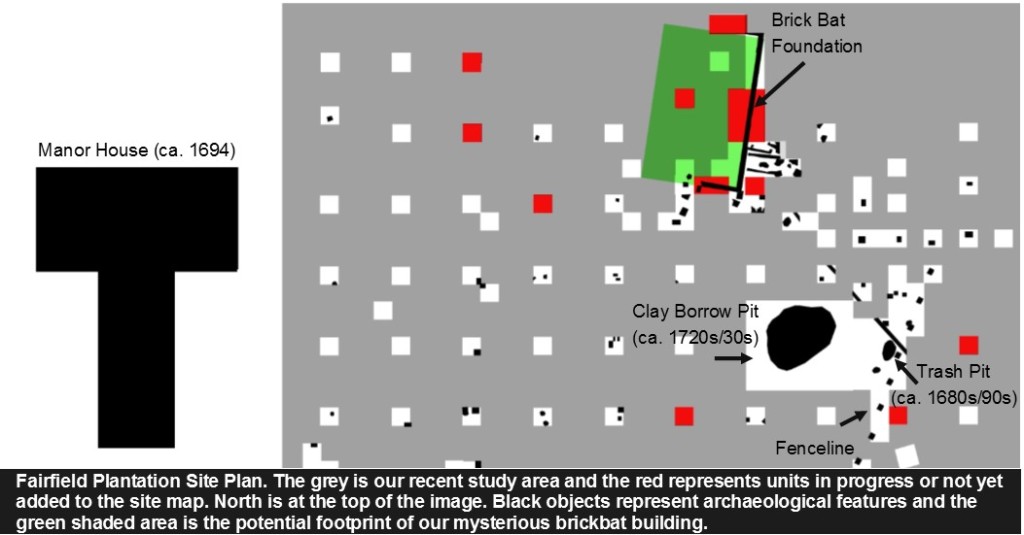 Over the next three summers we slowly expanded our excavations, chasing the foundation to the south and north, learning that it was part of the east wall and much more intact to the north than the south. And while part of the south wall appears to have been completely plowed away, the northeast corner survives and includes several complete bricks. The use of fragmented bricks suggests that these may have been recycled from an even earlier building, or leftovers from the construction of a nearby building, but not necessarily the 1694 manor, given the differences in brick size.  Since the building’s orientation differs from the manor house (and other post-1694 landscape features) by about 10 degrees, we believe it was built earlier.  On most contemporary plantations, outbuildings, fences and other features are usually built to match the orientation of the main house, as it brought a formal ordered arrangement to the landscape.  The layout of this brick bat foundation suggests that it may relate to an earlier landscape scheme.  The artifacts found in the plowed soils above include predominantly brick, wine bottle glass, tobacco pipe fragments, and ceramics dating to the early 18th century, which could be indicative of the destruction of this structure.  With a length of about 44 feet (exterior dimensions), and an unknown width, this building remains a mystery. 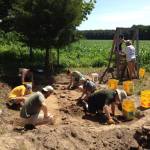 Staff and volunteers work to clean some of the brick bat foundation back in May of 2014, when we only had a 10 ft by 15 ft block exposed. 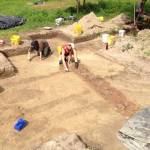 In August, staff and interns cleaned down a much larger block area after NIAHD students helped with much more excavation. Here you can see the slot trenches extending east from the foundation. 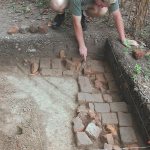 In August and September, staff, interns, and volunteers worked extra hard to expose and clean the northeast corner of the foundation. Thane points out some of the wide, whole bricks visible in the corner.

And the frustrating part is that we’ve come to the end of our main dig season! All signs point to a very exciting dig season NEXT YEAR. We believe this was part of a house, a domestic space likely associated with the pre-1694 manor house landscape, but also surviving into the period of Lewis Burwell II’s later ownership and that of his son, Nathaniel, who died in 1721. We are still open to other ideas for this building, including a large stable or kitchen, but only further archaeology will help us to answer some of these questions.  Our plans are to clean, photograph, and map the test units excavated to date and then determine which areas to excavate in 2015. Our priorities will be finding the full extent of the foundation, locating a fire place or heat source (most domestic buildings have one), and examining the interesting linear features (perhaps slot trenches) that extend east from the exterior of the building, and several large post holes near the south gable, all of which align with this foundation. Stay tuned for more updates as our analysis continues and plan to join us in the field next year when we look to solve one of Fairfield’s history mysteries.