You are here: Home / Archaeology / A Look at Colonial Drains 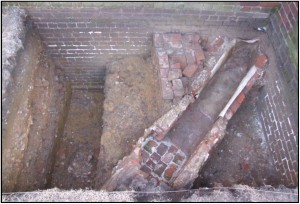 Archaeologists are always finding remarkable features that provide new insight into the colonial world. One type of feature that shows up with some regularity, yet receives very little attention, is the lowly drain. Serving a strictly utilitarian, though very useful, purpose and intentionally buried upon completion, drains are rarely remembered and generally forgotten. On many plantations they became so far removed from memory that they were invariably interpreted, when portions were still extant, as tunnels used to escape from Indian attacks.  This was a fascinating possibility when we first learned the myth as kids, but as we’ve visited and excavated at more plantations, we have become very familiar with these diminutive “escape tunnels.” Though we have yet to turn up any evidence for drains at Fairfield (the soil appears to drain well enough to prevent any need for them), they have appeared at many other plantations and urban sites across colonial America. Some of the most remarkable drains that we have seen are the large vaulted drains at Rosewell in Gloucester County. 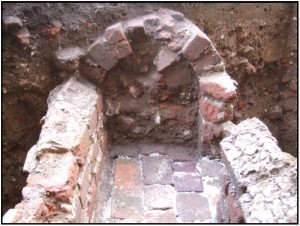 These vaulted brick drains have a dry-laid brick floor, relatively straight mortared walls and a round-arched top. Several drain sections at Rosewell had collapsed over the years and our excavations of different sections in 2000 and 2008 confirms their similarity. They appear to match a series of linear anomalies identified during a ground-penetrating radar survey done by Bruce Bevan of Geosight. The unusual feature in the drain we uncovered in 2008, at the point where it junctures with the house, is a thick lead lining that appears to have helped shed water away from the northwest corner. This was likely an afterthought, a reaction to unforeseen moisture leaching through the northwest wall, as the very modest slope of the drain likely did not allow the water to move away quickly enough.  The original roof of Rosewell was covered in large lead sheets, and we assume this lining was fashioned from leftover roofing material in the 1720s or 30s.  Drains of this type were built (and have been investigated through archaeology) at Corotoman (Robert King Carter’s home in Lancaster County), Purton (in Gloucester County), Westover (the Byrd Estate in Charles City County), the Wray site (one of colonial Virginia’s first building contractors) in Williamsburg, and at the Chew mansion in Maryland. These are only a few of the many examples that could be listed, revealing how widespread this practice was in the 18th-century.

One of the most remarkable features of these drains is the enormous amount of energy devoted to their installation, involving the manufacture of thousands of bricks, tons of lime mortar, and the digging and refilling of hundreds of yards of ditches that the drains occupied. The drains at Rosewell extend for at least 1000 feet from the house to Carter’s Creek.  All of this work provided the luxury of removing excess water from the roof and yard areas—a great concern among wealthy landowners who placed the aesthetics of their core plantation landscapes under great scrutiny. These property owners possessed a basic knowledge of engineering, familiarity with English drain design and books on the subject, and a vast labor force of enslaved Africans who made these projects possible.  In-depth comparitive research has not yet been completed to chart how the size, length, and popularity of these drains changes over time, when they first began to be used, and whether the influx of slave labor was the key factor that made these projects possible, or just made them more prevalent.  It is fascinating how these drains, which originated within urban contexts, show up on major plantations in the Tidewater.  Did their usefulness justify the cost, or were they much more of an aesthetic requirement?

Archaeologists at the Chew site in Maryland uncovered a brick drain similar to Rosewell’s. The top was plowed away.

Simpler drains identified at Tudor Place, constructed in Georgetown between the 1790s and 1810s, seem to indicate a much more efficient use of time and materials.  They were formed by laying down flat pieces of slate, placing bricks on top to create a small channel, and then covering the channel with another piece of slate.  Though possibly not as effective as the large drains at Rosewell, they would have taken much less effort and material to install. A brick drain of similar type and vintage was recently discovered at James Madison’s Montpelier estate.  Perhaps this indicates a  larger shift towards more functional drains, which required less material and less labor to build, yet still got the job done.