You are here: Home / Archaeology / Anything But Ordinary

Twenty years ago, two young archaeology students, David Brown and Thane Harpole, surveyed a farmstead site located in Gloucester County, Virginia, dating to the late 17th to early 18th centuries. The property was originally patented in the 1670s by Robert Bryan and was eventually part of the adjacent Belle Farm plantation. After the Civil War, the owner of Belle Farm gave each of his freed slaves twenty acres of land, mostly along the north section of Vaughns Creek, in the vicinity of the site. At some point in the 20th century, the land came into the possession of the Walker family, and subsequently was purchased by Mr. Morris Phillips. It was Mr. Phillips who approached these two talented archaeologists to ask about the artifacts that he had collected from his property. David and Thane examined the artifacts and suggested a formal survey of the site.

With permission of the property owner, these two youthful and passionate archaeology students conducted a surface collection survey covering 1.9 acres, 122 shovel test pits, and 5 test units all within 35 days. You can feel the enthusiasm from David and Thane’s field notes which read: “Going to shovel test!” “Shovel test pits done!!” “Mid 80’s – breeze – beautiful day” “Good artifacts, including a portion of a Spanish (?) silver coin (Very cool!)” and “We returned Morris’ stuff and had a good lunch at his house.” The artifacts recovered from their formal survey of the site were washed, carefully counted and/or weighed, and curated. The artifacts, meticulous notes, and color printed photographs (pre-digital) were placed in two boxes and sealed away, possibly in David’s parents’ garage. Fast forward to 2016, and two old, and sometimes funny archaeology ASV certification students from Minnesota came along looking for a research project. David and Thane located the boxes, blew off the dust, and handed the boxes over to Jim and Carol, and the Morris Phillips Site was revived! 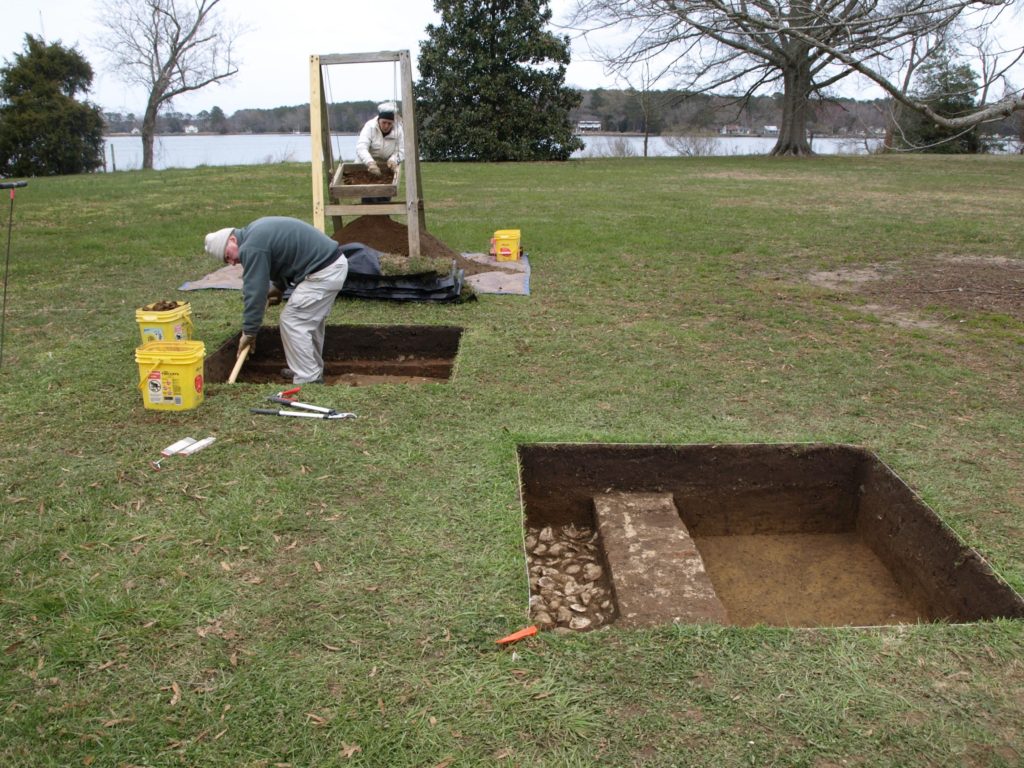 Jim and Carol hard at work at another site in Gloucester County, April 2018.

The assemblage consisted of  3,169 countable artifacts (tobacco pipes, ceramics, table and/or bottle glass, window glass, nails, etc.), with an additional significant portion of the assemblage composed of weighed artifacts (brick, mortar, oyster and clam shells). The majority of the artifacts dated to the historic period.

David, Thane, and a handful of eager volunteers recovered over 500 tobacco pipe fragments from the pedestrian surface collection and shovel test pit excavation, with a wide variety of maker’s marks and decorations (Figure 1). Archaeologists can analyze pipe stem fragments as one source for determining a site’s history.  In the 1950s, J. C. Harrington was working on some of Virginia’s colonial sites, including Jamestown, and noticed there was a relationship between the diameter of the pipe stem bore, or hole, and the age of the pipe. He concluded that pipe stems with large bores were manufactured earlier than those with small bores. Twelve years later, Lewis Binford, born in Norfolk, Virginia, devised a mathematical formula that we still use today to help assign a date of occupation using the bore size diameter of a collection of pipe stems from a site. The mean date of occupation of the Morris Phillips’ site was calculated to be 1708 using Binford’s formula. But one does not rely on tobacco pipe stems alone. These tobacco pipe stems are used in conjunction with historical documents and other material culture such as ceramics. 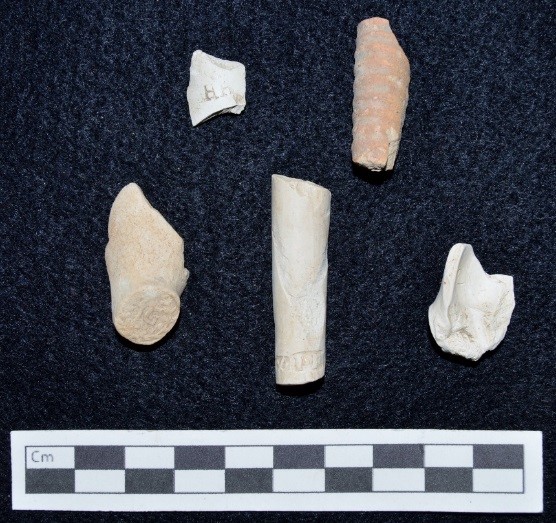 Numerous sherds of coarse earthenware were recovered, including North Devon gravel-tempered and Buckley wares, as well as stonewares (Figure 2).  Analyzing the ceramics, a mean ceramic date of 1714 (See Fairfield Foundation Blog “The Hall Site: A “Hallmark” of Mathews County” by Katie Brauckmann, March 17, 2018) was calculated.  Also of great interest, numerous sherds of colonoware were recovered. 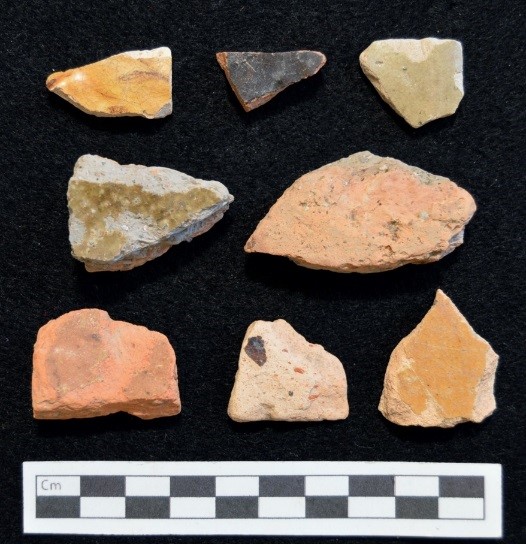 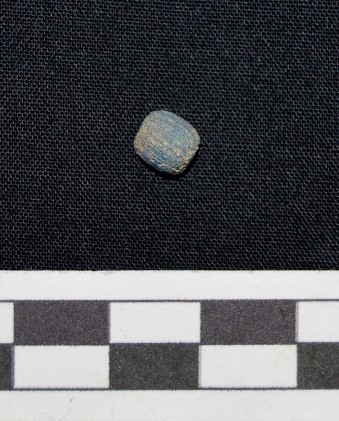 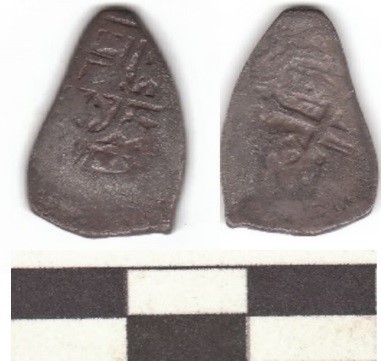 Brick made up the majority of weighed artifacts and was concentrated predominately in the northern portion of the survey area and this collection of bricks was interpreted to likely represent a chimney or hearth. In addition, the artifacts were clustered around this collection of bricks, which fits very nicely with the pattern of refuse disposal associated with a house. However, to our surprise and which needed explaining, was an additional dense cluster of artifacts located in the southern portion of the survey area not associated with brick.

Examining this southern assemblage, it was discovered that tobacco pipes, nails, glass and ceramics made up the majority of the countable artifacts, similar to the overall site. We speculate that this southern assemblage may represent another building, which does not contain brick, and questioned whether the distribution of different types of ceramics might provide further insight into the nature of these two structures and occupation time. What we found was that North Devon, a ware which was in use in the 17th and early 18th centuries, was distributed throughout the survey area.  Buckley ware, a ceramic type that is not seen in the Chesapeake area until around 1720, was found in the northern and absent in the southern portion of the survey area.  This also suggested that the southern portion of the survey area may represent an earlier occupation.

So you ask “What ceramics were in this area?”  What we discovered was that a discrete cluster of colonoware, along with the single blue glass bead was recovered in the location of the supposed southern structure. Colonoware is a low-fired, unglazed, handmade local earthenware found on multiple domestic archaeological sites in Virginia, and its use is commonly associated with the presence of enslaved African Americans. This, together with the blue glass bead raised the possibility that this portion of the site might have been inhabited by enslaved individuals.  We also found that the portion of the survey area corresponding to the possible southern structure shows a higher number of large bore pipe stems compared to the northern portion. In fact, the northern portion yielded a later mean occupation date of 1711, while the southern portion yielded an earlier mean occupation date of 1704. There was a similar number of small bore pipe stems in the southern and northern assemblages which led us to believe that the southern area was not only occupied earlier, but it remained in occupation.

So in the end, the Morris Phillips Site represents a small 17th- to 18th-century farmstead with 2 possible structures. One in the north with a later occupation date, containing brick, and another, likely smaller and simpler, in the south with an earlier occupation date and an absence of brick. The discovery of colonoware and a blue glass bead in the southern assemblage raises the possibility that it might have been occupied by enslaved African Americans.

More work is needed on this important site and we hope we can get back to it before another twenty years passes. 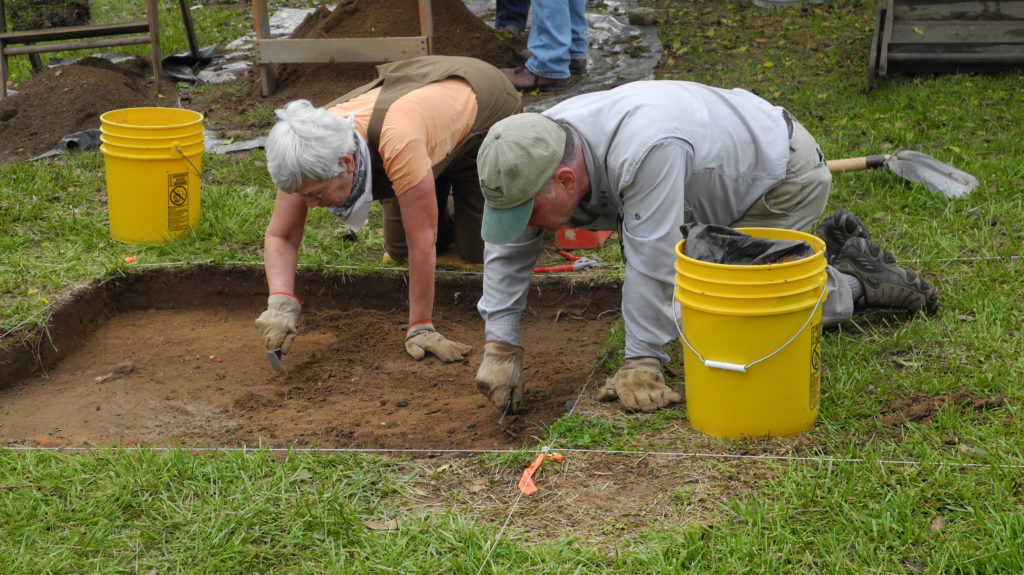 Jim and Carol working at the DHR’s field school at Eyreville, May 2018 (Courtesy of Mike Clem).

Editor’s Note: This blog was prepared by intrepid and passionate avocational archaeologists Jim Gloor and Carol Reynolds, and both Dave and Thane are happy that they chose to take this project on. This site is a great illustration of the richness of our local history, and the continuing research that can be done on archaeological sites, and with their collections, even decades after they were recovered.

Jun
1
Wed
10:00 am CAPE Artifact Wash Day @ CAPE
CAPE Artifact Wash Day @ CAPE
Jun 1 @ 10:00 am – 1:00 pm
CAPE artifact wash days are returning and open to the public! In an extension of our popular volunteer lab nights, we will now host a variety of artifact wash days at the CAPE. Any volunteers[...]
Jun
7
Tue
6:00 pm Volunteer Lab Night @ CAPE
Volunteer Lab Night @ CAPE
Jun 7 @ 6:00 pm – 9:00 pm
Volunteer Lab Nights have returned to the CAPE! Join us from 6-9 pm on the first and third Tuesdays of each month to help wash artifacts, learn about archaeology, and more! Email fairfield@fairfieldfoundation.org for more[...]
Jun
11
Sat
10:00 am Walter Reed Birthplace Tours
Walter Reed Birthplace Tours
Jun 11 @ 10:00 am – 2:00 pm
Stop by the Walter Reed Birthplace between 10-2 to tour the house and to learn more about Dr. Walter Reed!
View Calendar
Add