You are here: Home / Archaeology / Expanding the Boundaries of Preservation at Walter Reed Birthplace

One of the most satisfying moments for any preservationist is knowing, beyond a doubt, that they have preserved a part of the past for the benefit of future generations.  At the Fairfield Foundation, we look at preservation in the broadest sense possible – whether saving a building, preserving an old document, or recording stories through oral histories.  Recently we celebrated preservation of a more traditional mode: placing land next to the Walter Reed Birthplace under perpetual protection through the donation of an historic preservation easement. 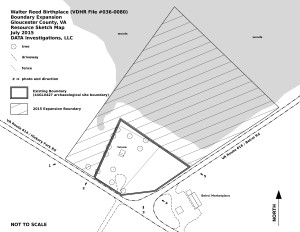 A sketch showing the expanded boundary of the National Register of Historic Places district surrounding the birthplace.

This act highlights our efforts to preserve the past throughout the Middle Peninsula – well beyond the bounds of our primary teaching site of Fairfield Plantation.  Working toward the preservation easement gave us another opportunity to collaborate with the Gloucester Preservation Foundation (GPF), allowing us to combine our interests in preserving local history and the legacy of Walter Reed. The easement donation not only preserves this parcel in perpetuity, but provides some financial incentives as well through the tax credits that result from this act of conservation, and this benefits our ongoing educational programs.

This adventure began for us late in 2014, when we worked with citizens concerned about future development on this parcel to purchase the acreage and prevent the construction of a single family home within seventy-five feet of one of Gloucester’s most well-known historic landmarks.  These generous donors deserve tremendous credit for having the vision to act quickly to save this property for the benefit of future visitors and county residents.  Alongside the GPF, which owns the birthplace and other surrounding acreage, we plotted a new future for this property.  Having worked with GPF, and their predecessor (Preservation Virginia), we knew there was strong interest in keeping this area intact, retaining the landscape integrity at this corner of the historic Belroi intersection. The Virginia Department of Historic Resources (DHR) and the Virginia Board of Historic Resources (VBHR) were also willing supporters of the project.

After little more than a year of negotiation, we recorded the easement deed of gift last month. The VBHR now shares with us the responsibility of protecting the 0.823-acre parcel of open-space land immediately adjacent to the Walter Reed Birthplace. This property is associated with the Birthplace throughout its history and includes part of the archaeological site related to commercial and domestic use of this land in the 19th century. 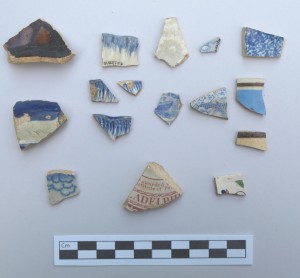 A sample of historic ceramics recovered during archaeology at the Walter Reed Birthplace.

The Birthplace was originally listed on the Virginia Historic Landmarks Register (VLR) and the National Register of Historic Places (NRHP) in 1973 for its association with Dr. Walter Reed, a medical doctor in the U.S. Army who is credited with the discovery of the cause of yellow fever and after whom Walter Reed Medical Center in Washington, D.C. is named. The Fairfield Foundation amended the nomination in 2015 to include approximately 7.6 additional acres, covering this property AND acreage to the northeast of the Birthplace.  The amended nomination also recognized a greater understanding of the historic significance of the property at the local level of significance, including documentary and archaeological evidence of commercial uses including Stubbs Store, established by 1811 and continuing in use through 1852, which connects the expanded Walter Reed Birthplace to other 19th-century commercial sites nearby including Stubbs Tavern. The nomination also recognized the efforts of the Medical Society of Virginia to preserve the site in the early 1900s and the value of the archaeological evidence, specifically associated with the 19th-century commercial and domestic use and occupation of the expanded Walter Reed Birthplace property. The amended nomination was undertaken in collaboration with the GPF and will ultimately benefit their efforts at interpreting and preserving this amazing property. 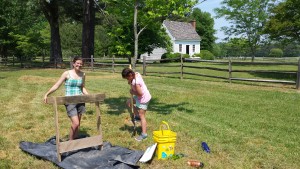 The easement protects this property in perpetuity. It prohibits subdivision and restricts new construction, ground disturbing activities and use of the property. Protected by the easement, the property will buffer the Walter Reed Birthplace site, which is also under easement with the VBHR, from residential development and will protect a portion of the rural landscape along Hickory Fork Road (VA Rt. 614). The easement requires that the Property be made accessible to the public on at least two (2) days per calendar year – so stay tuned for opportunities from the Fairfield Foundation and the GPF to visit and learn more about this site.