For several years the Fairfield Foundation and the Middle Peninsula Chapter of the Archeological Society of Virginia (MPCASV) have been slowly compiling research and initiating archaeology on one of the largest historic plantations in Mathews County.  An advertisement for the property in 1830 states that it was “deemed unnecessary to describe this well known estate, further than to remark, that superadded to the advantages it may possess of soil, climate and the various luxuries which the salt water affords, it is situated in a neighborhood seldom equalled for social and polished society.” As nice as this description sounds, archaeologists and historians thrive on details: what buildings were on the property and how were they arranged, where were slave quarters located, how did this cultural landscape disappear (because disappear it did- other than modern place names, there are no vestiges of this historic property visible above ground)?  To our knowledge, there are no 18th- or 19th-century descriptions of the estate that elaborate upon these details, so we are left with only scraps of information to represent this substantial landscape and the dozens of free and enslaved people who lived and worked here.  Archaeology can tell the stories of past peoples and places, but it is a long-term process.  Our work so far at North End Plantation is just beginning to tell its tales.

The plantation known as North End is tied to the history of the Page family, whose massive manor at Rosewell was the largest house of its time.  The Pages were large-scale landowners in Gloucester County (of which Mathews County used to be a part), they held local office, they served in the House of Burgesses and on the Board of Visitors at the College of William and Mary, and they associated with and intermarried with many of the prominent families of the day, including the Nelsons and Burwells.  They were also substantial slave owners, and their massive properties, and the mansions upon them, are monuments to the lives of hundreds of enslaved peoples who toiled in their shadows. 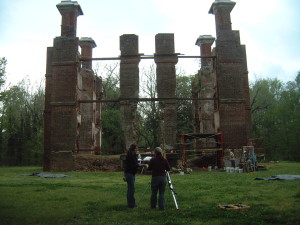 The Page manor at Rosewell

John Page (1724-1774) was born at Rosewell, and acquired the North End lands by the early 1740s, likely around the same time he married Jane Byrd, daughter of William Byrd of Westover.  He served as a Burgess from Gloucester County from 1752 to 1768, at which point he ascended to a position on the Governor’s Council.  Jane Byrd Page bore 15 children while they resided at North End.  John and Jane both died in 1774, less than two months apart.  Their eldest son, Mann Page, inherited the bulk of the estate, managing it until his death in 1778.  Andrew Van Bibber purchased the property in the 1790s and this landscape entered another major period of change. 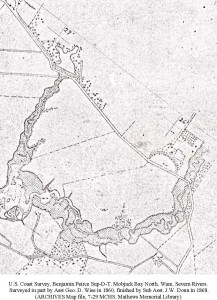 This shoreline survey map from 1868 shows the elaborate estate of the Van Bibber family, which replaced the earlier North End located to the southwest.

As far as we know, when John Page acquired North End, it had none of the ‘luxuries’ that the later add referred to.  Some of the land was cleared and under cultivation by an unknown combination of slaves, tenants and indentured servants, but it had no substantial manor that would befit a person of his station and means.  What type of plantation complex did John Page plan for North End?  Did he erect a commodious dwelling similar to Rosewell where he had grown up, or something more akin to Carter’s Grove, Warner Hall, or Mannsfield, still quite large and impressive but fitting a more standardized Georgian plan?  Did he have flanking dependencies connected by walls or hyphens, as well as a brick stable to house his prized horses?  And where did the dozens of slaves live (87 were listed in 1782) across the 2800-acre estate?  The remnants that we uncover beneath the surface speak as much to John Page and his family, as they do to enslaved women like Letty and her daughter Peggy, who worked on the plantation in the 1780s.

Through the efforts of many volunteers from the MPCASV and the Mathews County Historical Society, we have begun an archaeological survey of some of the lands that were once part of North End plantation.  Recollections by long-time residents pointed us towards several modern lots that could contain the remains of this 18th-century house complex, including the cellar of a large brick structure, likely the main house that was apparently only filled in during the mid-20th century, erasing the last visible trace of this plantation.  The first set of shovel test pits excavated, along with some careful soil probing, confirmed that there was quite a lot of hand-made brick in the area, as well as a few artifacts that could be attributed to the colonial period.  The plentiful brick is likely confirmation that this was a substantial plantation complex, comprised of several brick structures.  A 1774 sale notice* in the Virginia Gazette mentions the dwelling house and kitchen furniture, implying two of the major buildings, while a sale of ‘high bred horses’ in 1778 strongly suggests the presence of a brick stable. Brick stables were located on a number of contemporary plantations, like Warner Hall, but few survive and even fewer have been excavated. (*This and other documentary research is available in part due to the efforts of Becky Barnhardt and the support of the Mathews Memorial Library.)

Late last year we excavated a single test unit, and exposed what may be the builder’s trench, or robbed wall trench for one of these structures.  The probing suggests that this building is about 50’ long, which indicates a very substantial structure.  Future investigations will build on these findings, with the goal of identifying the size and locations of the main structures, so that we can begin to figure out how this complex was arranged upon the landscape.  Artifacts such as creamware, wrought nails, and burned fragments of marble can tell us much about the architectural embellishments of the buildings, and the domestic habits of the people living there.  They can also begin to answer bigger questions about how Europeans and Africans molded the landscape around them to suit their needs, how they set up new systems of land ownership and agriculture, and how a new American culture arose from a mixture of diverse backgrounds and perspectives. 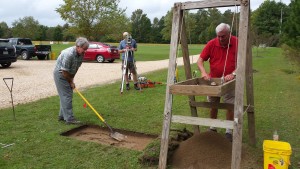 Excavating a test unit where probing indicated a concentration of brick on the presumed site of North End plantation.

As we have learned at Fairfield during the past 15 years, you can spend lifetimes doing archaeology to uncover and understand the lost landscapes of these massive plantations.  There is so much that we still do not know, but incrementally we are discovering more and more pieces of the puzzle.  While we are keeping the excavations at North End small and limited in scope, they are contributing to a much broader understanding of our history in Mathews, Gloucester, and across the Middle Peninsula.  They are also providing more opportunities for local residents to get involved in archaeology in their community, helping us to write the untold stories of Mathews history.