You are here: Home / Archaeology / Mapping Buildings and Burials at Gloucester Town 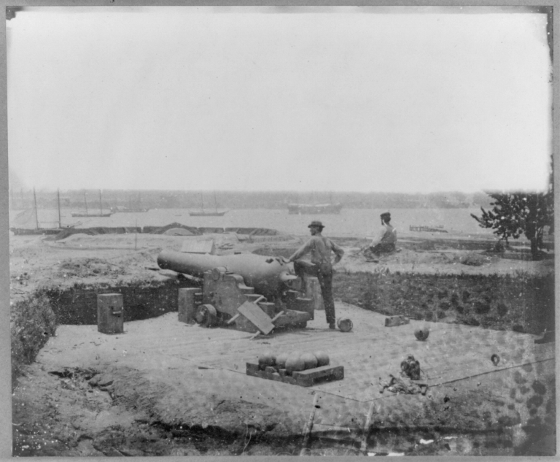 What happens to archaeological collections and associated documentation when the dig is over? Two weeks ago, fellow Colleen Betti wrote about her analysis of collections from the large slave quarter yards and midden at Fairfield (click here to read Colleen’s blog). Colleen’s research will culminate in a senior honor’s thesis at the College of William and Mary, which will be available to future researchers through Swem library. In a similar way, salvage and contract archaeology often concludes with a comprehensive technical report. In Virginia, these reports are available in the Department of Historical Resources (DHR) archives in Richmond. Archaeologists planning new field projects consult these site reports in order to get a glimpse of what other researchers learned and perhaps what they can expect from excavations. But what happens when numerous organizations and contract firms have excavated in the same area? It becomes much more difficult to piece together the history of a place and its residents unless all the various research has been synthesized.

Over the past year and a half, I have been working with the Fairfield Foundation to research the history and archaeology of Gloucester Point. In particular, we are interested in Gloucester Town, a thriving colonial port located on the York River and the present-day site of the Virginia Institute of Marine Science (VIMS). Gloucester Town’s history of archaeological excavation extends back decades, primarily spurred by the expansion of the VIMS campus. These efforts led the placement of the Gloucester Point Archaeological District on the National Register of Historic Places in 1985. As a colonial port town, it has great comparative potential with sites like Colchester, recently excavated by Fairfax County archaeologists, and Yorktown, just across the river. Our goal is to add to the extensive body of research on Gloucester Point, writing “biographies” of Gloucester Town residents, overlaying historic plat maps on the landscape, and relocating previously-excavated archaeological features using GIS.

The high density of human burials is an endemic problem for archaeologists at Gloucester Point. While some contract firms elected to shift construction in order to preserve burials in situ, other firms fully excavated human remains, taking advantage of their research potential. Between 1983 and 2005, more than thirty burials were uncovered within the confines of historic Gloucester Town. My goal? Map each burial location – whether or not an individual is still interred on that site – in order to preserve extant human burials and determine known burial areas. The challenge? Mapping technology in the 1980s and 90s doesn’t come close to what we use today. I scanned site maps from the DHR, geo-referencing them (transforming them to a known coordinate system using a set of control points) in ArcGIS. I then digitized burial features, entering reference data in an associated table. The result? A clean map of burial locations on the VIMS campus, indicating key areas of historic burial concentrations. In particular, I note an area where seventeenth- and eighteenth-century Gloucester Town inhabitants were interred, a Revolutionary War era cemetery associated with Cornwallis’ siege of Yorktown and Gloucester Town, and a nineteenth-century burying ground postdating Gloucester Town. 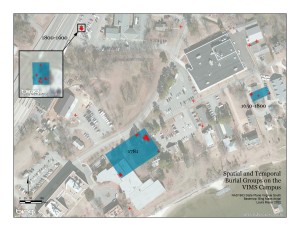 Beyond these goals, I have been researching the mortuary contexts and skeletal biology of individuals interred at Gloucester Point, contextualizing data using social history – a research model I take from Julie King and Douglas Ubelaker’s report at Patuxent Point, Maryland. I hope that this research – and the contributions of other Fairfield Foundation staff and volunteers – will add to the rich history of Gloucester and the Chesapeake region.

We welcome your comments and questions about the archaeology of Gloucester Town and the Gloucester Point area.  Much has been researched and written about this area, and we hope to add more content to this discussion in the near future that will help synthesize all the existing information out there about this significant place.

We extend our thanks to Laura Masur for conducting this research and preparing this blog.