This week for the first time, University of Florida students, along with Fairfield intern alum Jessica Taylor, will record oral histories and folklore in Mathews and Middlesex Counties. Nine undergraduates, two graduate students, and one senior research staffer are all extremely excited to fall in love with Virginia history. If you see them, say “Hi”! 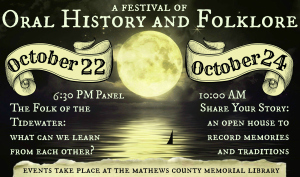 This blog was co-written by Jessica Taylor and Annemarie Nichols. Annemarie, a UF English major, is the primary author and one of the undergraduates visiting the Middle Peninsula on Tuesday. She’s from a big Southern family from the Northwest Florida/Southeast Alabama area, and has been captivated with the folklore she has heard from individuals in her community and from family members her entire life. Those stories have impacted her and shaped her identity as an aspiring scholar more than anything else in the world. It’s Jessica’s honor to unleash her talents on the blogging world. Without further ado:

Just imagine an eerie Halloween night in Mathews County: an old ship creaking through the foggy sky to the edge of the woods, filled with ghostly figures clambering out of the ship to search for lost treasure they buried hundreds of years ago but never recovered. Quite understandably, residents of Mathews County as well as individuals outside of the community are fascinated by the phantasmagorical details of Old House Woods, rumored to be one of the most haunted places in the Commonwealth.

Through each retelling, the basic structure of the story always remains the same, but subtle differences in characters and plot suggest that multiple lessons might be drawn from the same place, the same tale. Floating ships with ghosts coming down into the woods to search for lost treasure always make an appearance, but every storyteller embellishes the tale a different way. Mathews Tugboat captain Davey Callis remembers his granddaddy retelling the story as he had heard it from an old man when he was a young boy:

“He’d start with, the greatest time you’ll ever see in your life down in Old House Woods last night! And he’d talk about seeing a sailing ship and a Jacob’s ladder hanging over the side and the skeleton sailors coming down, you know, with the shovels to go find Lord Dunmore’s treasure.”

Davey Callis’ story is a surreal history lesson of the Middle Peninsula. The unnamed old man, huddling on a cold night by the wood stove inside a Mathews general store, resurrected early Virginia’s most infamous colonial governor—who pushed the colonists into open rebellion—and the anonymous men that obeyed Dunmore’s bidding. Maybe the story as Davey Callis heard it is really about the total and sudden failure of the pre-Revolutionary government, the fact that the abrupt departure of Dunmore left the colonial project incomplete. Or maybe not; there are so many details that are less than self-explanatory. Why doesn’t Lord Dunmore seek out his own lost treasure? Who are the sailors, and why are they left behind? Why do they approach by sea and not by land? Mathews waterman Roscoe Rowe’s rendition changes the identity of the sailors and recounts a physician’s direct encounter with the ghost:

“I always heard that the main thing was the pirates came to shore there in a storm and buried their treasure. And they never did get it. They never did find where they buried it or they came back. It was a child there that was crippled and some doctor was going to visit in the night or something, and he saw a ghost out there with no head. They were out there looking for that treasure and stuff and all that kind of thing.”

PIRATES! What could be more exciting? In Roscoe’s story, what appear to be brutally murdered pirates are searching for the booty they buried but were never allowed to find in bodily form again, another story with undertones of incompleteness. But unlike in Callis’ story where the old man had “the greatest time” at Old House Woods, these pirate-ghosts are frightening apparitions that underscore the fact they’re dead by appearing headless. Beyond being headless, they are also faceless: we don’t know who they are, or where and what time they’re from because they’ve been severed from their identities. We only know why they reappear and that they met a grisly end. “The end” is the front-page news of this story, which underlines violence and the danger of the seas, but also the tragedy of ambitions cut short. Indeed, violence and futility draw the attention of travelers like the physician on a foggy night.

The reason Old House Woods still shivers our timbers is the fact that it generates witnesses to the stories—and by that I mean living Virginians who pursue and make meaning from the undead. Kevin Godsey, another Mathews waterman, adds ghostly capers performed by the treasure-hunting apparitions: “And they’d come steal peoples’ horses right outta their lot and ride ‘em up and down the road at night.” He suggests the treasure hunting ghosts haven’t lost their marauding abilities and that they physically reach out to the living.

In addition to fostering cross-generational sharing, it also fosters conversation and experiences among peers about their local cultural heritage. Roscoe Rowe remembers the curiosity he and another boy had about Old House Woods:

“One time I went down there: we were young children. Well, we were fourteen or fifteen. Mack was there—Mack Forrest—and he caught us coming out there. He used to kind of look out for the place. He lived across the road. And he came out there and he had a big flashlight he was shining on us. And Doug Croswell, a boy from Gloucester, he looked: you don’t look like no ghost to me. And Mack said, you’re gonna be a ghost if you don’t get away from here. [Laughter] I thought that was the funniest thing I saw. That was the most spookiest thing I saw.”

Whether or not the storyteller actually witnessed the creaky ship and ghost sailors is not the most important aspect of the local folklore. The ghostly tale’s significance is drawn from the integral part it plays in the cultural heritage of Mathews County. The story includes scraps of early American history wrapped up in the supernatural. Residents of Mathews County value the story because older individuals like grandfathers, fathers, and the anonymous “old man” shared the tale with them. Truly, the stories themselves are alive. Sharing Old House Woods fosters important local stories about death, loss, and history. By investigating their cultural heritage they save it, creating their own version to share with other individuals. This Halloween, when you are spending time with friends and family, be sure to tell them the story of Old House Woods. Mischievous skeleton sailors that refuse to leave their buried treasure behind—because we keep talking about them—for us invokes The Legend of Sleepy Hollow, in which Irving writes, “There are certain half-dreaming moods of mind in which we naturally steal away from noise and glare, and seek some quiet haunt where we may indulge our reveries and build our air castles undisturbed.” When we build air castles together, they become real.