You are here: Home / Archaeology / Tales from the ground at Rosewell

Over the past year and a half we have been doing limited archaeological testing around the Rosewell ruin in preparation for the installation of new interpretive signs as well as for tree plantings. We do this work because the Rosewell site is under a protective historic easement held by the Department of Historic Resources, and because the buried layers and artifact have many stories to tell us about the history of this iconic landscape. The Fairfield Foundation has had a longstanding arrangement with the Rosewell Foundation to assist them with managing their archaeological resources. Some of this work has also been timed to coincide with the last two Rosewell barbecue events because archaeology is best when it can be shared with the public, engaging visitors in the discovery of fragments of the past. Children are often the most intrigued by being able to scrape away a thin layer of soil that tells a story about a particular chapter in history, or by shaking dirt through the screen to see fragments of brick, nails, and glass appear. These artifacts are tangible connections to the past- a past that holds many stories we do not fully know, but can uncover bit by bit in the ground at Rosewell.

The old adage about not being able to dig a hole in Virginia without turning up history is amplified at Rosewell. Several acres surrounding the house appear to have escaped the plow, leaving multiple layers intact to tell the site’s story, rather than one jumbled layer as at many other sites in the area. Because of this complexity, and the richness of the archaeological record, we want to preserve as much as possible for future research, and so we only excavate a limited number of tests to mitigate the impacts of new signs and trees. Although each of the tests excavated so far has interesting information to reveal individually about Rosewell’s history, the results will eventually be analyzed in conjunction with previous archaeology to get a more complete picture of changes to the landscape across time.

One test unit in particular, excavated about fifty feet away from the front of the house, uncovered a series of buried layers including a small cache of wine bottle glass and tobacco pipe fragments. This material was found more than a foot below the ground surface, underneath both the modern topsoil and a fill layer that likely dates to the mid-18th century after the mansion was completed and the grounds were cleaned of construction debris.  The glass includes a complete wine bottle base and two bottle necks of a type common at the beginning of the 18th century. The pipe fragments, several of which were marked with the initials ‘AS’ on the side of the heel, date to a similar time period. The ‘AS’ mark potentially represents a pipe maker in Westminster, England known as Anthony Sidwell, who worked from 1696 to 1717. Both wine bottles and pipes were imported to Virginia in large quantities and the Page family purchased many of these items for their use. They were also fragile items and readily discarded once broken, so we recover many fragments of these everyday items. However, to find such a concentration in a small space suggests a different story. Perhaps this was one bucket of refuse dumped in a small depression in the yard, or possibly somebody knocked a couple of bottles and pipes off a shelf and quickly disposed of them? As the mansion was completed and occupied, did the residents of the 18th century remember the pieces of history buried in the ground beneath them? It is a puzzle for us to try to figure out why things end up where they do, and what they meant to the people who put them there. 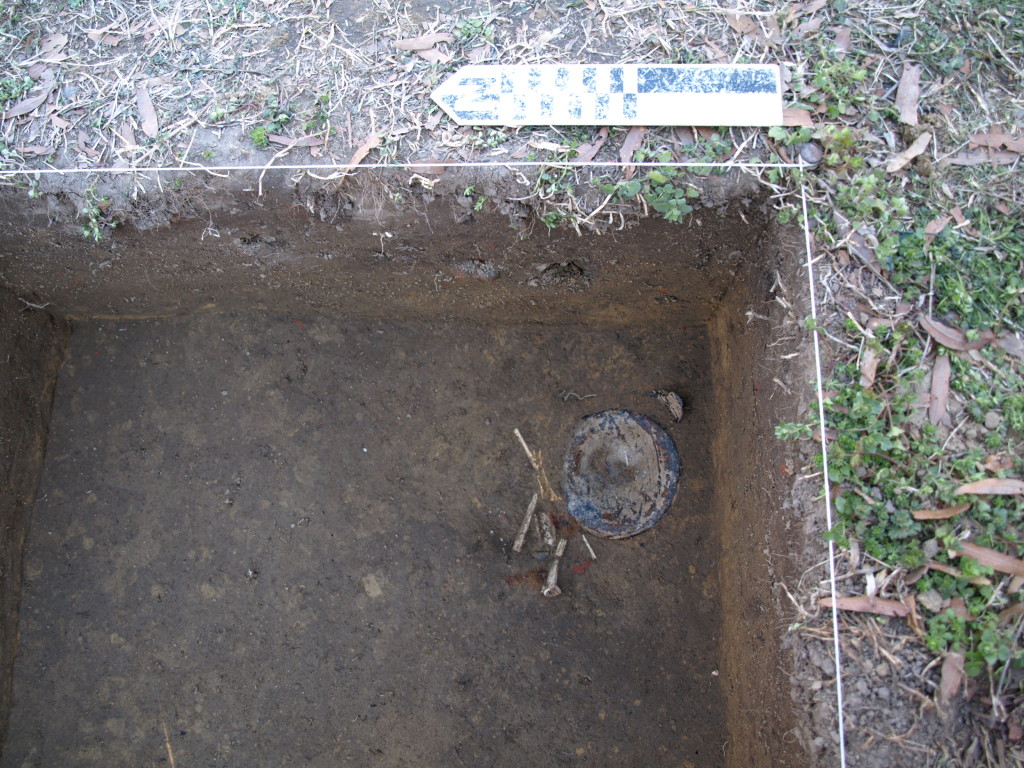 A large wine bottle base was found near a handful of tobacco pipe stem fragments in the base of a unit testing for future tree locations.

Archaeology may not reveal all the details of how these objects were used and discarded, but it offers new insight into what happened at Rosewell, and gets us a little closer to understanding what life was like in centuries past. Like many of the plantations and other historic sites in the region, Rosewell’s archaeological resources tell the stories of many people, and many time periods. From the Virginia Indian ceramics that show up in the lower layers across the site, to the more recent detritus of some modern visitors, this place has always had an allure. Every hole we carefully excavate helps us understand that allure and uncovers fascinating new stories to be shared with future visitors. 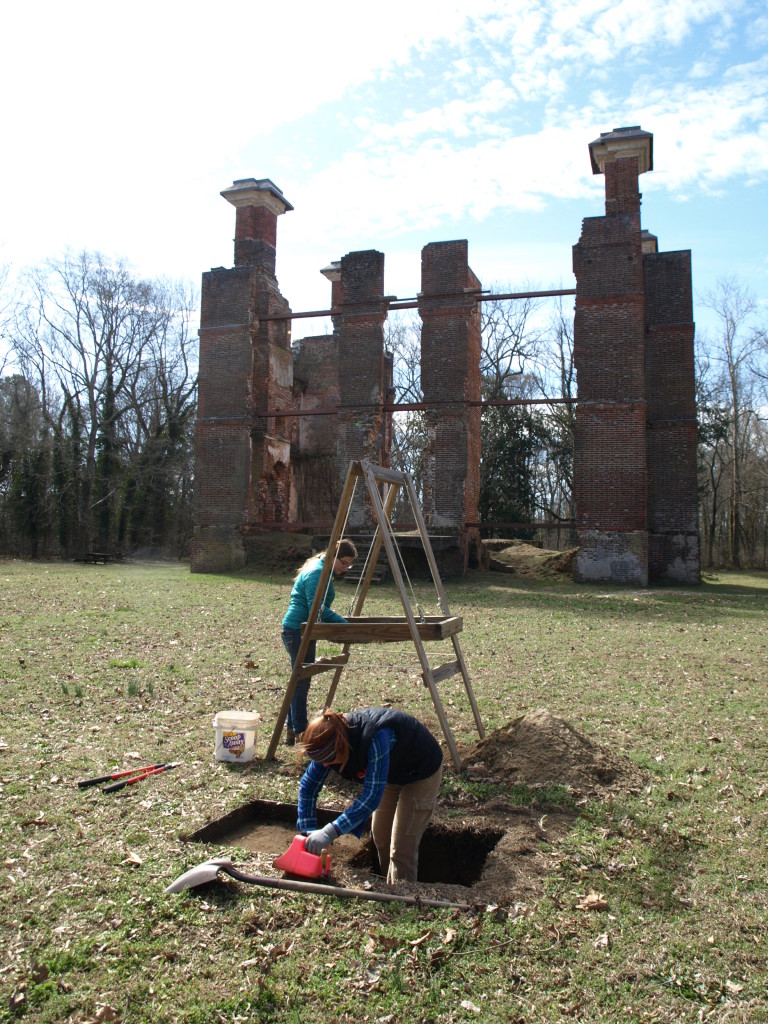 Further excavations took place to test for tree locations in front of the Rosewell ruins.

If you would like to learn more about Rosewell’s impressive archaeological collections, email us at Fairfield@fairfieldfoundation.org and we will be happy to provide more information. Rosewell has just opened for the 2016 season, so please plan a visit if you have not seen this magnificent site. For more information visit www.rosewell.org.