“You can’t set foot in Mathews County without tripping over a piece of history.” Many of you have heard this before, and you’d be hard pressed to argue against the sentiment.  Mathews County, along with Gloucester, Middlesex, and perhaps the majority of the Old Dominion is so infused with history that it is an important part of how we identify ourselves.  The artifacts, buildings, and landscapes around us define our communities and inspire great local pride. Mathews County is particularly protective of its history and passionate about preserving it – a point illustrated by several projects they’ve recently supported that are intended to document and preserve county history.  One of these is an Archaeological Assessment of Mathews County, undertaken by DATA Investigations over the past year.

How do you assess the archaeology of a county?  Good question.  It’s not easy.  How can you assess the physical evidence of all prior human activity in such a large area – even if Mathews County is the second smallest county in Virginia?  Our first step: pull together everything we already know.  The Virginia Department of Historic Resources (DHR) has an inventory of archaeological sites in Mathews County.  When we began the project in 2014 there were already over 140 sites- each site location corresponding to at least three artifacts and classified by its function and era. The sites had been recorded by both professional and amateur archaeologists, but occasionally by property owners, museum professionals, and others – a true community-created list.  And while that number seems large, Mathews is one of the most under-surveyed counties in Virginia (neighboring Middlesex has only 62, while Gloucester County has 476 sites, and Fairfax County is the most-documented in the state with 3740).  There are likely thousands of archaeological sites in Mathews County, we just haven’t found most of them yet.

What kind of sites are already known?  The inventory includes much more than just eighteenth-century plantation sites and prehistoric campsites.  There are Revolutionary War-era sites related to Lord Dunmore’s occupation of Gwynn’s Island, colonial-era barrel wells eroding from the shoreline of Milford Haven, and a mid-seventeenth-century farmstead that may be one of the earliest European settlements in Mathews County.  There are also the earthworks at Fort Nonsense, Woodland-period Virginia Indian settlements near New Point Comfort, and early twentieth-century African-American house sites representing the first generation of freedom following the Civil War. 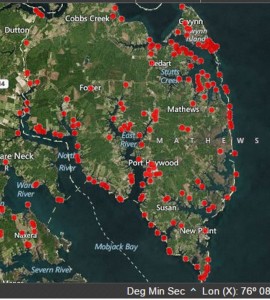 Archaeological sites registered in Mathews before the current survey

But the most surprising aspect to us was the absence of many sites you might expect to find in Mathews County.  There were no ship building sites, no colonial taverns, and no Paleo-Indian sites, distinguished by the fluted projectile points that mark some of the earliest habitation in this hemisphere.  There were no mills (tide or grist), no Civil War-period encampments, and almost no family cemeteries.  Does this mean that these sites don’t exist in Mathews County?  Certainly not!  The citizens of Mathews County already knew where many additional sites were, often filling in some of the knowledge gaps that we had noticed.  The second part of our assessment was to talk with local residents, look at the artifacts they had and the locations where they were found, and inventory these and other sites – all without putting a single shovel in the ground.

Our assessment of Mathews County’s archaeology was intended first and foremost to expand the number of inventoried sites, connecting and making the information on these sites accessible to planners, the DHR, and Mathews County and its residents.  We added 51 new sites (and updated 67 others so that they are now much more complete) to the DHR’s inventory and are currently completing a detailed report that discusses these additions, and also provides recommendations for what should be done next.  Even with the increase in the number of sites, there are large portions of Mathews County that are still under-documented, but undoubtedly contain evidence of significant parts of our shared heritage.  And what of the known sites?  In the report, we recommend ways to research and preserve these important properties, working with property owners and ensuring that the public interest is served through the protection of historic places and important information.  Two things were made very clear during this assessment: that Mathews County had many more archaeological sites than were previously known, and that this project would only be the beginning of a much longer effort to document the buried history of this area. 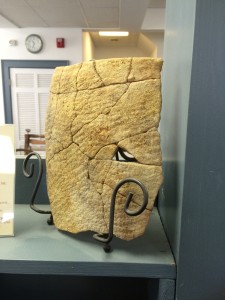 Prehistoric pottery sherds recovered from the southeast end of Gwynn’s Island. Artifacts now on display in the Gwynn’s Island Museum. 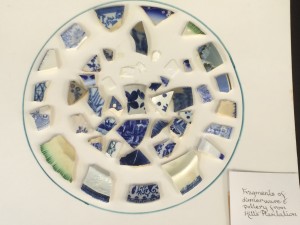 If you are a resident of Mathews and have found artifacts on your property or may have some information about archaeological sites in the county (or in neighboring counties- we work throughout the Middle Peninsula), please contact us at fairfield@fairfieldfoundation.org. Although the current survey project is being wrapped up and will soon result in a report, we will continue to look for new sites so that we can keep this effort to document Mathews’ history going.