Hi, my name is Colleen Betti and I am a rising senior at the College of William and Mary. I am excited to be back with the Fairfield Foundation for my fourth summer. This summer I am looking at artifacts from the midden – a large trash disposal area – and slave quarter yards at Fairfield. The midden is located to the northwest of the manor house, likely dates to between 1750 and 1850, and may be as large as 300 x 600 feet.  Slave quarter features dating to the first half of the 18th century have also been found in the same area. The first goal of my project is to catalog contexts from the midden/slave quarter area and use information about the size and age of artifacts to attempt to separate objects discarded in the midden from those deposited earlier in the slave quarter yard. Extensive plowing has mixed up the stratigraphy and has broken artifacts. However, I am hoping that it has not destroyed all original size differences, so that I can separate these contexts based on the assumption that objects that were swept and trampled in slave quarter yards have been broken into smaller pieces than those that were picked up and thrown in the midden. Regardless, I am going to input the data into Surfer to create distribution maps to look at how the use of this part of the plantation changed over space and time.  Additionally, I will attempt to identify the locations of more slave quarters and service buildings. 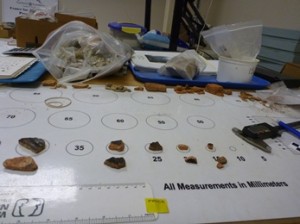 Colleen’s workspace, where she sorts her ceramic sherds by size

So far this summer, I have cataloged the artifacts from four test units. The majority of artifacts in the midden are oyster shell, brick, wine bottle glass, and bone, but there are also a good number of ceramics, pipes stems, nails, etc. To me, the most interesting artifacts so far are some weird pieces of North Devon Gravel Tempered ware. I have been referring to them as the “funky stuff” as they are very thick, have more gravel inclusions than normal, and it is unclear what kind of vessel they originate from. 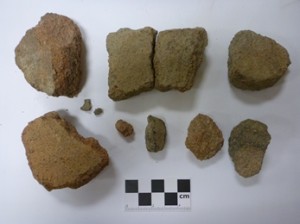 One of the neatest finds is two pieces of German Westerwald stoneware that form part of a medallion featuring Queen Mary II of England (married to William III; reigned jointly from 1689 to 1694) dating to the end of the 17th century. Other cool finds that I have cataloged include part of a 19th-century toothbrush, a slate pencil, part of a copper bell, and pieces of a mirror. 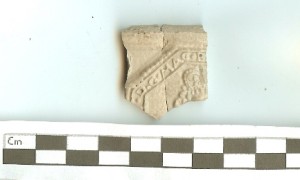 Most of what I have learned so far relates to cataloging artifacts, especially identifying the method of manufacture for glass and nails. As I have not yet tried to separate the midden and slave quarter yard artifacts, I have a lot of work left to accomplish my larger goals. However, while cataloging I have noticed large differences in the types of refined earthenware between test units. All four test units examined so far are within 20 feet of each other. If there is so much variation in this small portion of the midden, I am guessing there will be even more once I expand my efforts to other test units.  I hope to share more of my findings in future posts, so stay tuned for more research on the Fairfield midden.